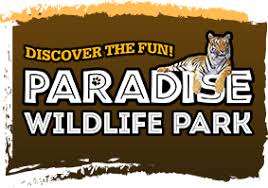 All the children love animals so we were really looking forward to our visit to Wildlife Paradise Park. As you enter the park and look at the map you will see that it is almost split in to two different parts so we decided to start on the side with all the animals on. First of all we saw the lemur enclosure and farmyard animals, further on are the big cats; we have been to a few zoos/wildlife parks that have big cats and sometimes we haven't been able to see more than a few of them so we hoped to be able to spot some on our visit here and we weren't disappointed! 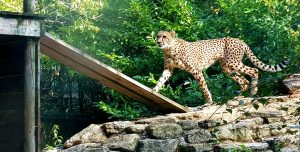 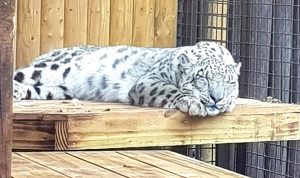 As we walked towards the white lion enclosure we managed to just about spot two of them, and then we saw the treetop walkway which allows you to walk up above the big cat enclosures, this gives a brilliant view, we could see across their whole area and it meant that all the children could have a really good look. Along the walkway you could also see a young Cheetah who moved very fast! The tigers were slightly further away but the best view we had was of the jaguars. When we got to their home, the keepers were trying to coax one back inside so that they could clean, but the jaguar was being very stubborn! 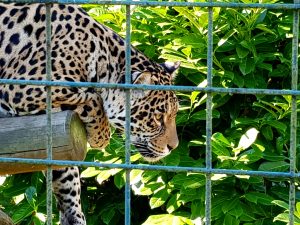 He walked up above the ground on his platform and plonked himself right down next to the walkway we were on. He just would not move for the keepers so we were able to see him very close up for about ten minutes, which was amazing. The different animals were in themed areas; next up we were in the Amazon region with gibbons, meerkats and an indoor rainforest which is home to lots of different monkeys. The outback animals were a big hit with the children and they loved watching the penguins splash around in their pool and you can walk through where the wallabies are kept. 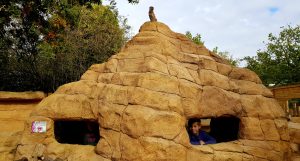 We stopped for lunch just next to Monkey Mayhem which has large slides and a climbing wall amongst other play equipment. There are plenty of picnic benches around, hot and cold food and drink is served and the play areas are in view of the picnic benches. 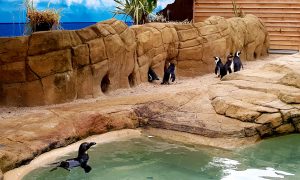 After lunch we crossed over in to the second area. At the far end is paradise lagoon; this giant paddling pool would have been lovely to use in the summer but it was a bit chilly when we went so we gave it a miss! Next to it there is a speedway museum and a cafe with a large soft play area inside. 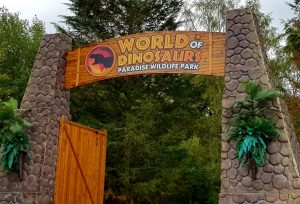 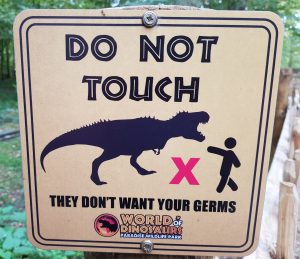 The main attraction around this side of the park is World of Dinosaurs, a large circuit of incredible dinosaur models. It is fairly new, only opening earlier this year. 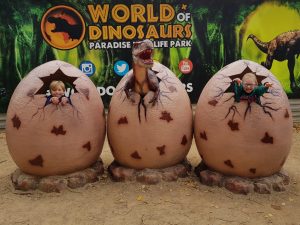 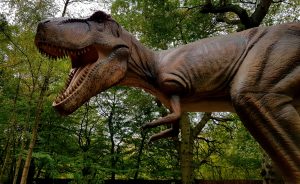 Many of them were animatronic, making loud noises and moving around, great fun! It is a really big area too so it takes a little while to walk around so you can see it all properly. 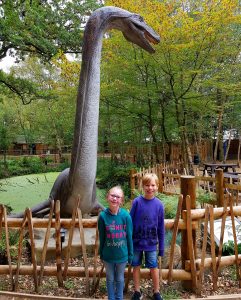 There are more refreshment huts and toilets over this side as well as more picnic benches. At the other end you come to a series of different play areas, some aimed at toddlers, some for older children, an adventure playground, a pirate ship and a train and fire engine with slides. Two walkabout areas are either side of the pirate ship, in one you can see reindeer, and through the other you can walk over a bridge to see the wolves. There is so much to see and do at Paradise Wildlife Park; the animals all look really well looked after and we were able to spot all of the big cats that were in the large enclosures. Every day there are a variety of feeds and talks to see including the red panda, tapir and otters. 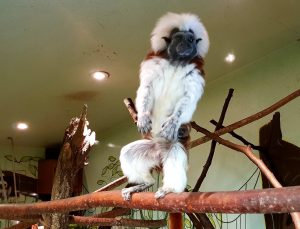 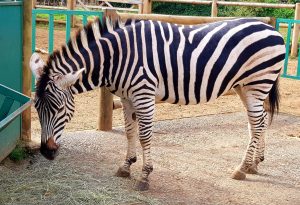 There are shows in the Jungle Theatre and a Wings of Wonder show in the Bird Arena. The treetop walk which allows you to see the enclosures from above is a great idea, however, our only moan about this is that it is quite long and there is a ramp at one end and stairs so you can use a wheelchair or buggy to get up, but once you walk all the way to the other end, there are only stairs down! So we had to walk all the way back on ourselves just to get back down and then walk to where we would have come down from. We also found this on the wooden platform next to the gibbons where it starts as a ramp and finishes with steps, and one of us had to stay with the buggy while the children went off to spot the wolves as there were only steps. There was a buggy park here but we have two little ones in a buggy and the baby was asleep so it really wasn't practical to wake him up or to leave a buggy with a huge amount of our stuff underneath unattended.

We visited with a 7 year old, 5 year old, 2 year old and 10 month old and they all had a fantastic day. I like that there are plenty of play areas because although the children loved seeing the animals, they feel like they are walking a lot so they also really enjoyed a break every now and again to play. The World of Dinosaurs is such a well thought out space, it makes you feel like you could really be walking amongst them and I particularly enjoyed asking my son to pose in front of the naughty dinosaur who squirts water at unsuspecting people at the end (he didn't realise he was going to get wet)! 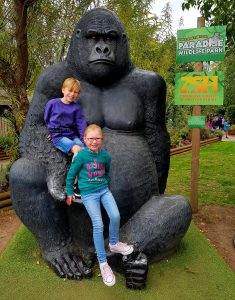 Paradise Wildlife Park is open all year round and the ticket prices vary slightly depending on the season. Click here to visit their website and find out the current prices. Under 2's go free. You can also take advantage of some of their experiences which include feeding the big cats or shadowing a keeper for a day. 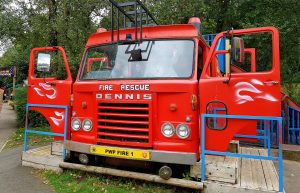